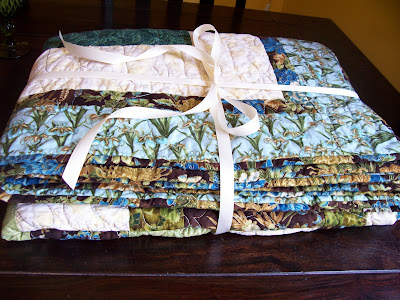 It all started with a fabric. Two years ago, while at the International Quilt Festival in Chicago, I found this fabric: 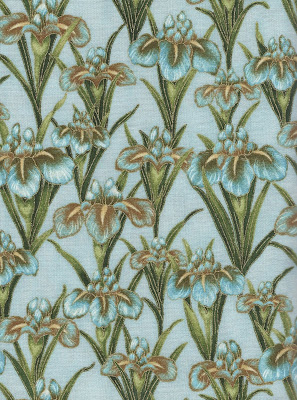 It's just irises, right? Well, yes... but, there's more to it. I love irises, not just because they're a beautiful flower. I love them because when I was little, maybe around ten years old, my best friend and I would play in this abandoned field, affectionately known as "the Prairie." The pair of us had vivid imaginations and invented an entire fantasy world there, complete with magical quests, spells and evil sorcerers. We played there for hours at a time.

Every spring, as the snow melted, the Prairie would flood with melt water and, in the middle of what seemed like a lake of puddles, a bunch of wild irises would bloom. We would forge our way, as best we could, over logs, hurdling puddles, searching out the driest spots, until we reached those flowers. We would pluck one or two each for our mothers and then attempt to extricate ourselves from the mud. Invariably, we came home with mud up to our knees. I remember stamping my velcro shoes all the way down the block in order to get as much mud as possible off, but always managed to track it in the house.

So irises always make me think of this friend and those days and the Prairie. I knew when I bought the fabric that I would eventually make her a quilt. I started collecting fabrics around that one. I tossed over many pattern ideas and eventually realized that I needed something that would showcase the fabrics and not cut them up too small. After playing with EQ7 for a while, I came up with this: 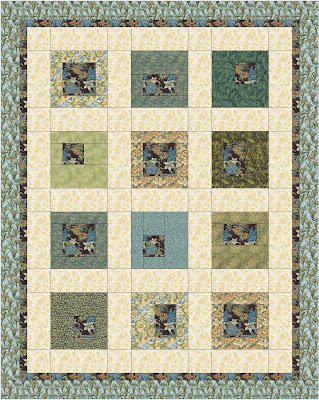 It's a simple pattern and took me less than a week to put together. I cut all of the fabrics for the top in a couple hours and sewed the center of the top in one night. The second night I cut and sewed on the borders and then layered the "sandwich." It took me two nights to quilt it and one more to bind it and attach the label. 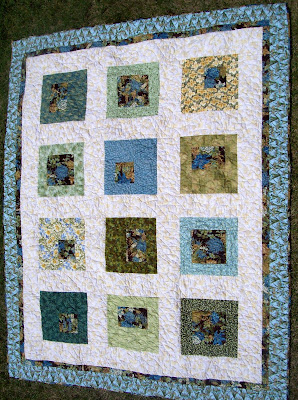 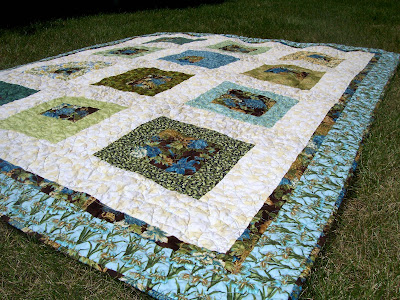 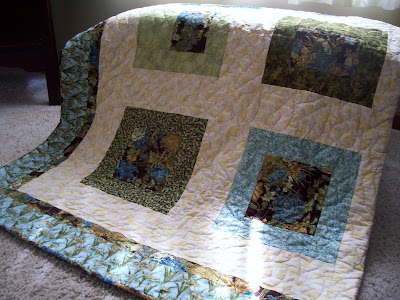 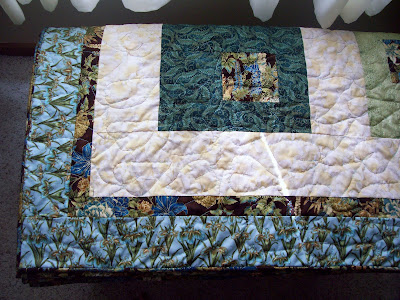 I used a varigated thread for the quilting and I free-handed those leaves on my sewing machine. I do not have a longarm quilter, but I have just this year gotten over my fear of free-motion quilting and am starting to really enjoy the process. 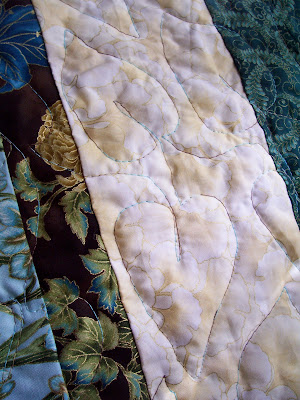 A label is a pretty personal thing and normally not something I would share, but in this case I'll make an exception. 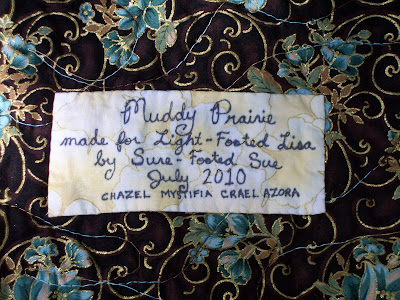 Those words at the bottom that look like they're made up... well they are. That's a spell that we made up and somehow I've never forgotten. Did I mention we had vivid imaginations? :)
at 7:18 PM

Wow, what a beautiful memory and an equally beautiful quilt! I love the label and the spell. < sigh >

this is beautiful....the colors together are so pretty

Beautiful! Just gorgeous! And those free-hand leaves...perfect! Thanks for linking up to Mad Skills Monday!

And link up all you want for more chances to win 30 days FREE ad space!

Irises are one of my favorite flowers! What a beautiful quilt.
(visiting from Someday Crafts)

What a neat story and beautiful quilt. Thanks for sharing the label! I especially liked the personal touch!

That label is such a sweet touch! Beautiful work. :)

Beautiful! Following you from Me and My Bucket!

I really love the quilt. The design is great, but the sentiments are even better. Everyone needs a prairie to play in.

That is one beautiful quilt, and the story and sentiment behind is even more precious. The colours are so pretty. I'm a quilter and I'm hoping to try free hand quilting on my machine soon too.

Hi Cecily. I can't believe it took you less then a week to create this gorgeous quilt. I love that fabric too.

Thanks so much for sharing the story that inspired the quilt. It makes the whole project so much more precious and memorable. That quilt is gorgeous!! You have got a lot of talent!!

Lovely quilt, wonderful memories! I met my oldest friend when we were in the ninth grade--my family moved around too much before that for friends to go back further. I know how much she'd love something that celebrated our friendship as much as that does yours. Makes me think! Thanks.

This is a beautiful and outstanding piece! You had me had International Quilt Festival in Chicago ;). Thanks so much for linking with FFT.

Wow, this is amazing. I am excited to read more posts.
Following from FFF

You did a beautiful job! She's going to love it for sure.

Did you stitch in the ditch first or just do the pattern? I'm doing my first quilt and am a little confused about this and the overall effect it will have.

Visiting you from Sew & Tell Fridays on Amy Lou Who.

You did a wonderful job, she'll love this, thanks for sharing !

Love the story and the quilt is amazing :o)

Thanks so much for stopping by my blog and following. I am now following back :)
@Paisley Passions
@Laughter & Memories

Wow! Beautiful! You have been a busy gal!

What a beautiful quilt! I LOVE this pattern, and your color choices are great!
Thanks for stopping by my blog today:)

Very cool quilt! Your story is very sweet too. :)

This is Lovely :-) I am hosting a jewelry giveaway on my blog. Would love for you to visit.

I really enjoyed your Muddy Prairie story - I give most of my quilts personal names like that as well. I have nominated you for the versatile blogger award - details are on my blog. Thanks.

I've awarded you the Versatile Blogger Award! Check it out at the link below:

Congrats! This is a well-deserved award!

Wow! I love it! What a thoughtful and priceless gift. Thanks so much for sharing!

Love the quilt, love your design and fabric, but mostly, I LOVE your story! How sweet to share your creative vision with us! Your friend is so blessed!

Love the quilt and what a memory to go with it!

Thanks for linking up on Crafty Friday!

This is absolutly lovely! I think the pallete in your fabrics is amazing.

Thanks for linking up at www.simplydesigning.blogspot.com

what a great quilt! and it all began with that beautiful fabric!!

WOW! The fabric is gorgeous!! Honestly, this quilt is just charming! Great work!

What a great story. You have done a great job with the colours. They work so well with your feature fabric.

I love the quilt and the story that goes with it. It turned out beautifully. Isn't the quilt show in Chicago the best?! I'm still afraid to free motion quilt, but have tops stacking up so I need to get with it.

I’m hosting a new link party “Cheap Thrills Thursday”. It’s for creative ideas that cost under $20. If you have a project you’d like to share, I’d love for you to stop by and join in Thursday!

I love the story that goes with this quilt!! This is why we craft.

I am your newest FFF friend!
Please stop by and say HI:)

I think quilting is such an art and I swear I am going to learn one day. Your quilt is beautiful - the irises are gorgeous.

This quilt is really beautiful, I love all the fabrics and colours.. the free hand quilting is amazing! It looks lovely.. and the story behind the quilt is almost even more lovely than the quilt itself :)

wow! thanks for sharing sucha touching and personal story and quilt with us [me]. I dont have very many fond memories growing up so I live through others lol. it was sweet and tasteful, and I bet she appreciated it. I know that I would. it looks beautiful and very well done.