This past weekend I got to go to the Renegade Craft Fair in Chicago.

Vendor after vendor had the most amazing creations.  And they were all so different, one to the next.  I wish I would have taken more pictures, but I was completely taken up with absorbing it all and shopping.  I came SO close to breaking down and throwing myself under the bus for Stashbusting September.

I was so close, in fact, that I had literally started writing the post where I was going to put up Robin's "I shopped!" button in my head.  My BFF saved me.  This is what almost broke me... 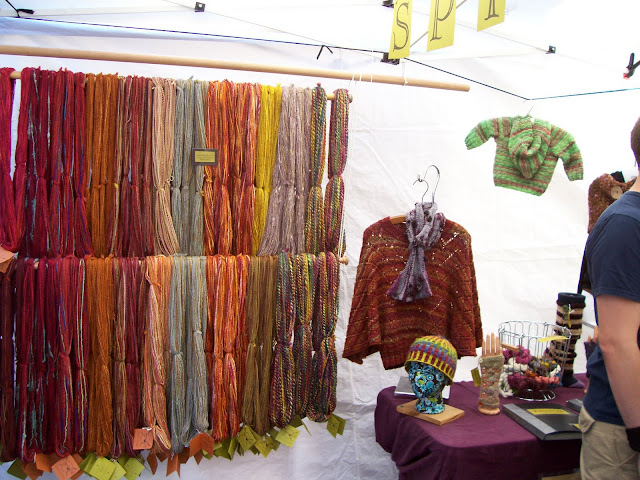 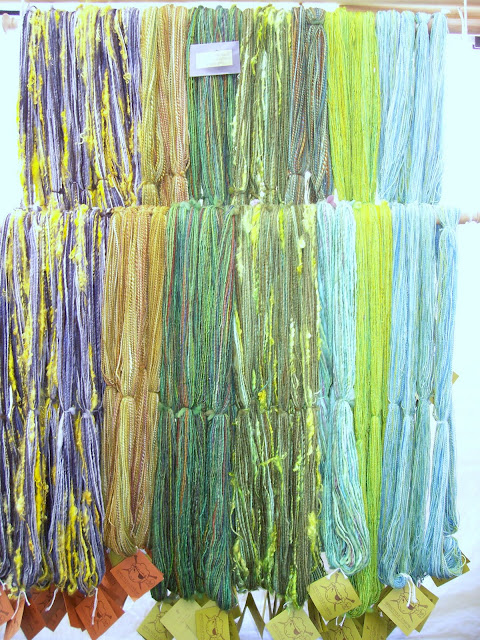 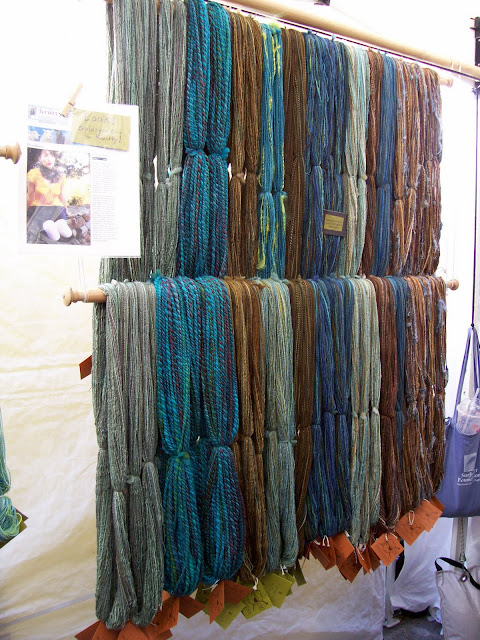 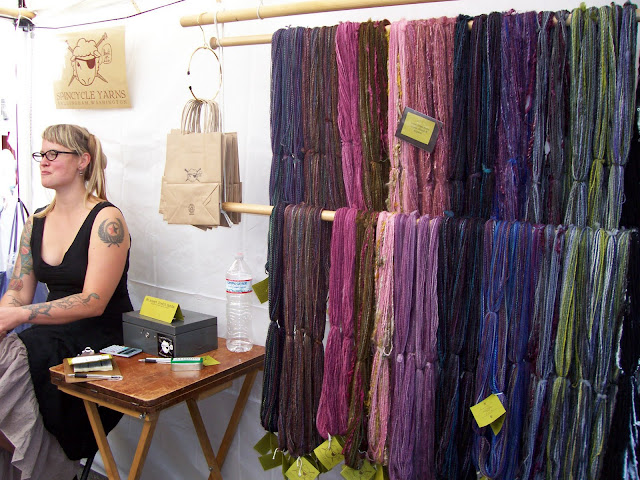 Skein upon skein of the most amazing hand-spun yarns.  They were to die for.  The name of the booth was Spin Cycle and they were out of Bellingham, Washington.  Seriously, I still can not even believe that I didn't buy anything.  Not a single piece of spun woolen goodness.

I will dream about that yarn for months.

But there's more!  I got to meet Katie from Skunkboy Creatures! 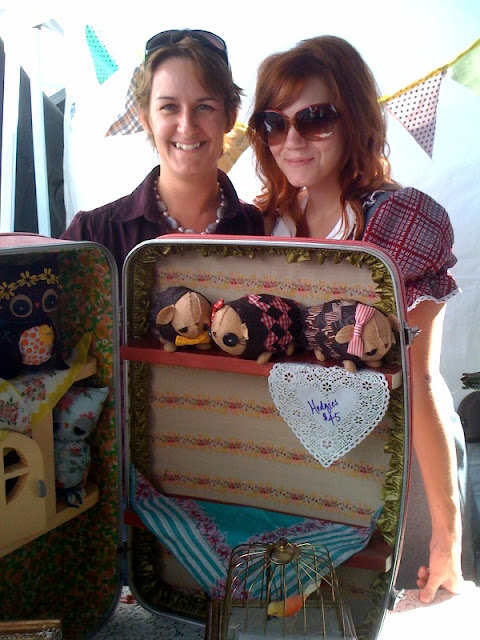 Let me assure you - she is as sweet in person as she is on her blog.  And not only am I stupid happy in this picture because I got to meet her in person, but because I got to buy one of her plushies!!!  I've wanted one forever.  See that empty space under the Hedgies?  That's where he was when we first met... 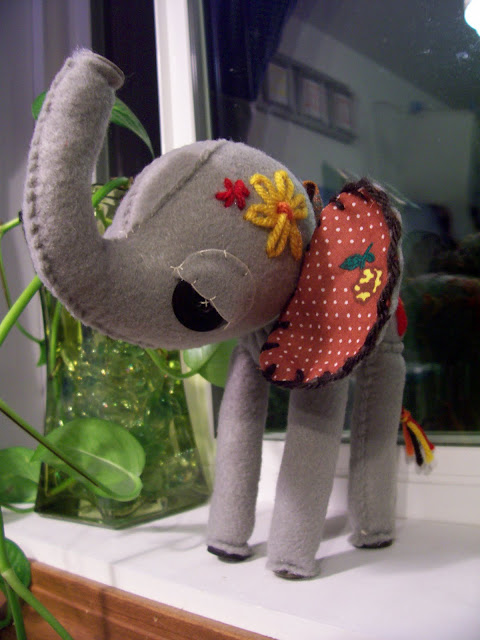 In the car on the way home, he told me his name is Edward. 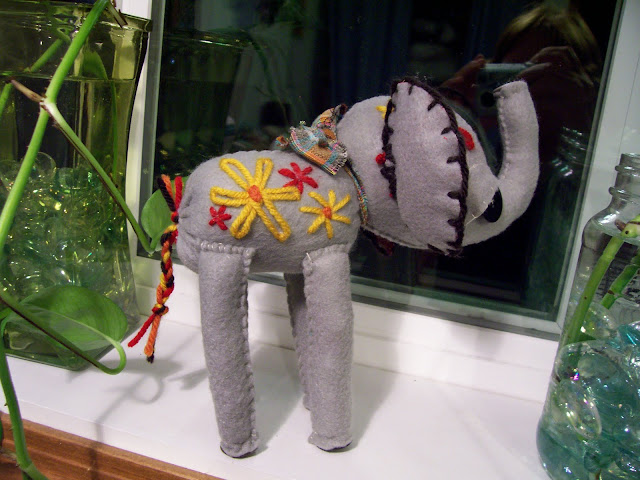 He likes my craft room his new home. 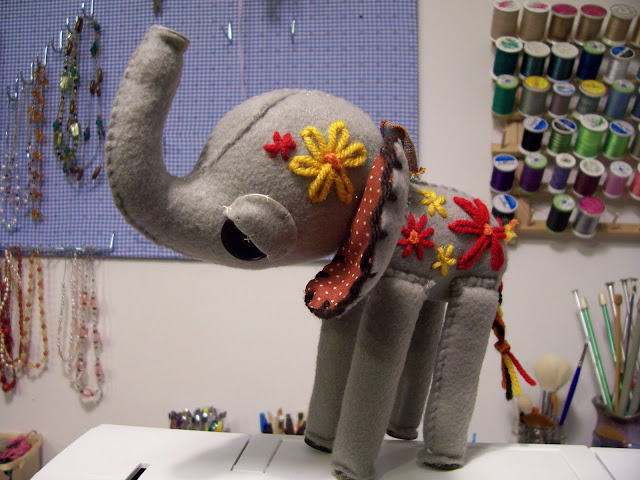 Edward got a better view of his surroundings from on top of my sewing machine.  I told him that he had to be careful and watch his step up there.  Although, clearly, I am the one that is in danger of falling. 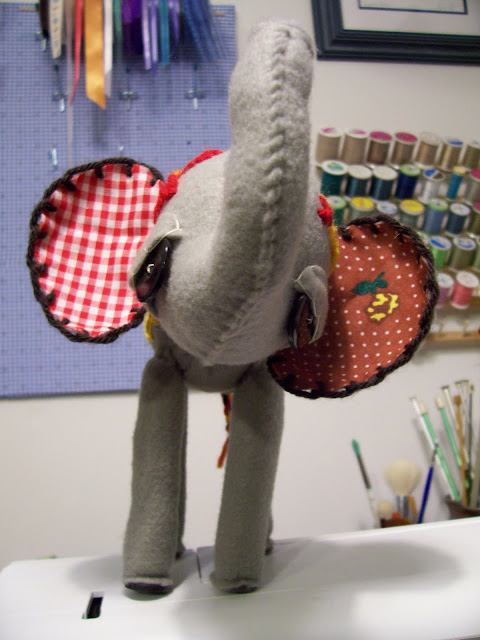 I love that his ears are mis-matched.  And that he is manly enough to wear his red and yellow flowers with pride. 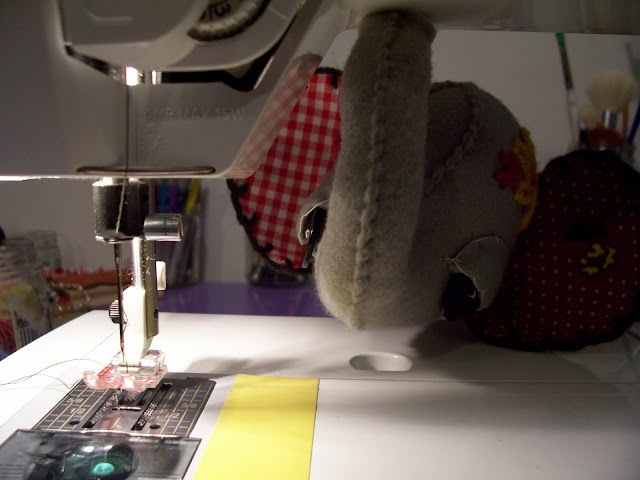 He was very curious about how the machine actually worked.  Maybe I'll teach him how to quilt.
I think he'll be a great muse.  I'm going to have a hard time explaining to my son that he can't have him, though.  He already got ahold of Edward once.  He hugged him close and said "awww" and then he promptly started twisting his trunk.  Poor Edward.  But then a little while later my son brought over another toy elephant and put it next to Edward so he wouldn't be lonely.  I think he'll be happy here.
at 6:22 AM

How did you manage not buying even one skein of those hand-spun yarns - so pretty! Edward it adorable. I look forward to seeing more of his adventures in your craft room - er, his room :)

HE is too cute! I want an edward!

I love your elephant!!! And I did a little sigh at the beautiful yarn since I can't shop until I deplete my stash.

Little Edward is certainly cute, but what is cuter is your saying your son got ahold of Edward and said AWWW and proceeded to twist his trunk! LOL! You must have been dying and wanted to SNATCH it away! Well, you can always 'bribe' your son and say, "I'll make a deal with you: if you promise not to touch Edward, I will buy you a Lego at Toys-R-Us." Hey, it might work... :)
Best,
Gloria