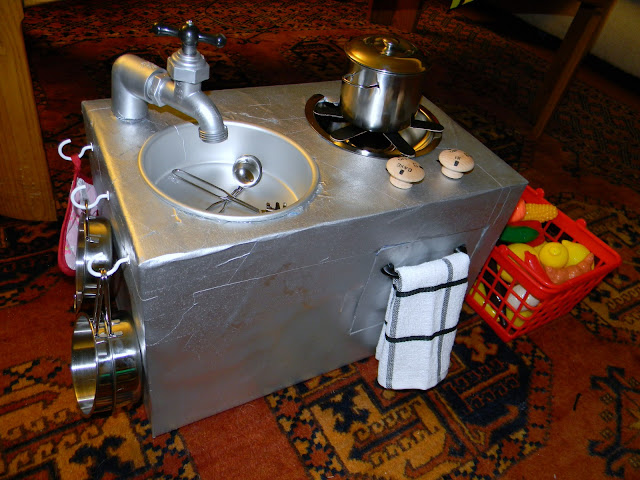 It's been rainy and grey the last couple days here so we've been doing more indoor activities with my son. 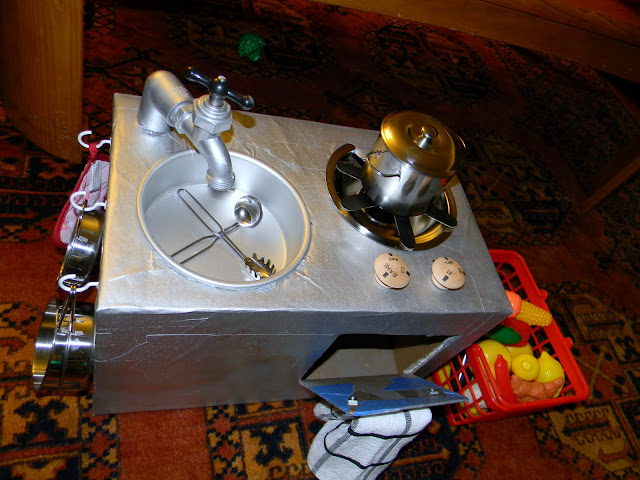 And I finally made a low-budget version of something I've been wanting to make my son for a little while - a kitchen set.  Originally I wanted to make one out of a refurbished end table like I've seen out in blogland, but lack of tools and budgeting have held me back. 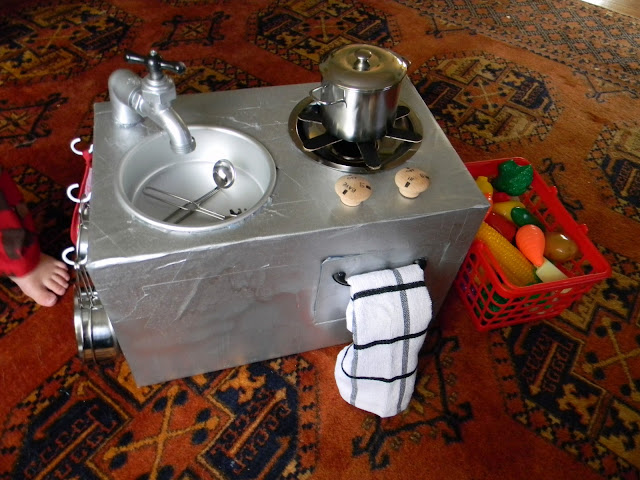 Instead, I just decided to repurpose a cardboard box.  This particular one was a diaper box, but as you can see it has been reincarnated as a hardcore stainless steel appliance.  It only took some silver spray paint, my hot glue gun, some painter's tape, and a little less than $20 in random "hardware."

A plastic valve, an elbow joint, and a little cap underneath became a faucet and a 15cm round baking pan became a sink.  Don't forget to wash your hands before you start cooking! 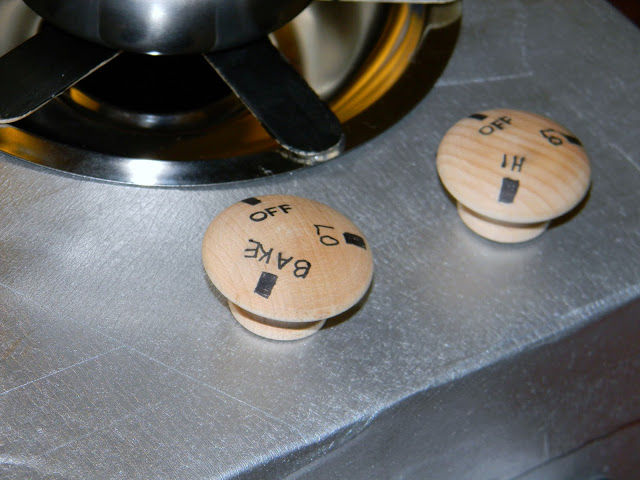 A pair of wooden cabinet knobs became the oven and stove dials.

A 6-inch burner pan and 3 jumbo craft sticks painted black for a burner. 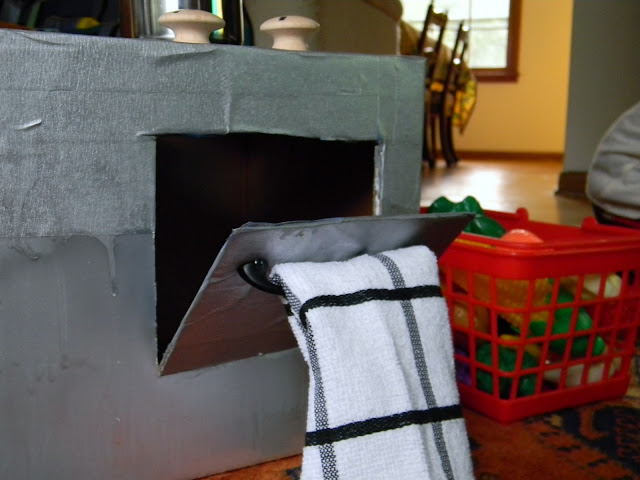 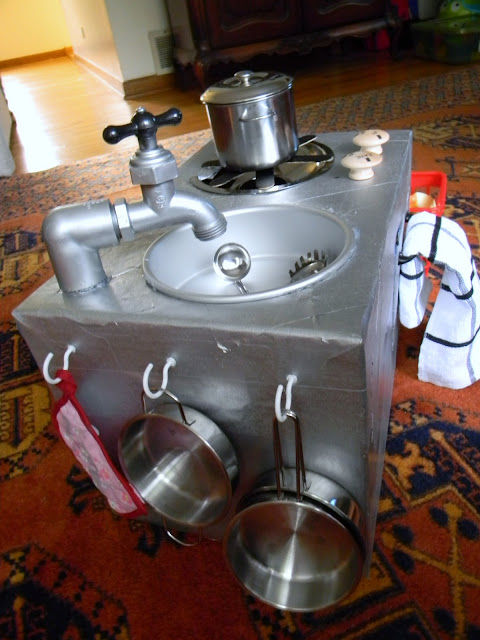 And, for a little extra storage (because what chef doesn't need more storage), three cup hooks to hold a set of pots and pans. 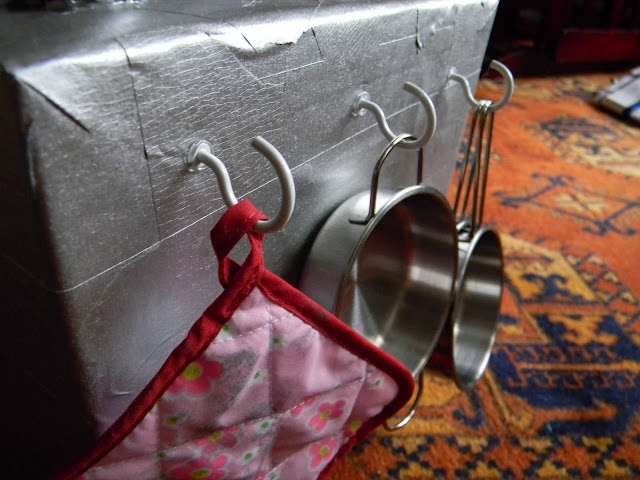 Tip of the day: if you try this do not use clear packing tape - use painter's tape.  The spray paint will not adhere to the packing tape, but does adhere to the painter's tape.  Use a hot glue gun to seal the various parts to the frame where necessary and for added stability and extra masking tape across all the seams helps a lot too.  I know that typically you'd think that cardboard wouldn't hold up for long, but those diaper boxes are pretty sturdy.  I think we'll get plenty of use out of this one. 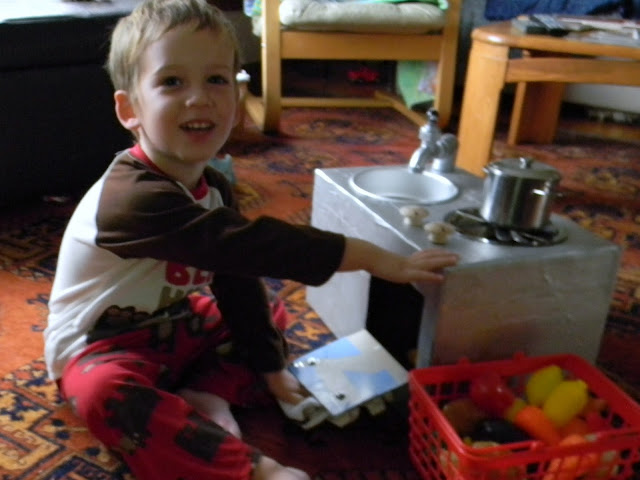 Not the clearest picture, but here's my little chef in action - baking an orange and an ear of corn for me.

The plastic basket of fruits and veggies was $5 and the set of pots and pans were $12.88, both at Wal-mart.

I'll be linking this up at Met Monday and a bunch of other fun link parties...
at 12:12 PM

OMG are you kidding me?!?! WOW. That is freaking amazing.

I have a project bookmarked for the future and it was an end table.

This idea with a simple cardboard box ROCKS!

I've seen other cardboard toys that others have made and heard that they actually hold up quite well with a little reinforcement, which you covered.

BTW - it looks great and you won't have to feel even slightly guilty when you toss it.

I love it. What a great job you did. I have seen so many hand made kitchen sets. Why would anyone pay the PB price for one. My granddaughters have the set their Mama had painted the PB pink. Their grandpa made it for their Mama and he refinshed it for them. Then he made a washer and dryer..........
My son wanted a kitchen set when he was 3. I didn't want to invest in a really nice one because I didn't know how long he would ply with it. I was able to purchase a cardboard one that worked just fine.
You will be eating lots of pretend food.

I really really like that. A kitchen is on my list of things I really want my daughter to have at some point. I hadn't really thought of a cardboard box one. What a good idea.:) I'm a new follower from Pinkapotamus.:)
http://everydaygameplan.net

You are ridiculous. This is awesome. I remember the days when I used to make things out of cardboard. Now I want a kid so I can do that again!

Do you make adult size appliance? Hehe. That's fabulous and your son will remember that forever. Promise.

now you are so smart. This project is so amazing. I'm marveling at the popsicle sticks on the burners....I would have never of thought of that...but it looks perfect! Good job! I started a link party at my blog and I'd love for you to link this up. If you're interested it's http://caribbeanmissionarywife.blogspot.com/ Have a lovely day, Maria

WOW!! That is amazing!! I love it, you did awesome job.

This is awesome! I love the hardware!

So creative and cheap! Gotta love it! I am a new follower from Blue Cricket Design. Vicky @ www.messforless.net

Wow, Cecily! This is fantastic! I love the craft stick idea... too clever!

Urban Stylist In the Country... said...

WOW!Love this kitchen! You hit so many good things,up cycle,recycle,craftiness no plastic junk for toys! and on and on!
:)
Gaylene
blog-hopped from Trendy Treehouse